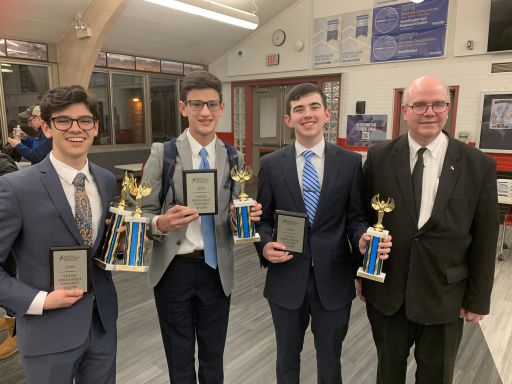 The month of February was a busy one for the Chaminade Speech and Debate team.

Following their stellar performance at Harvard, our students traveled to Regis High School for the National Speech and Debate Association (NSDA) National Eliminations in Debate. Michael Bellia '21 qualified for Nationals in Lincoln-Douglas debate. Peter Voiutthas '20 and Charles Weiler '20 will attend Nationals as part of a Worlds Debate team made up of debaters from the New York City area.

On Leap Day, 14 students attended the NSDA National Eliminations in Speech at Syosset High School. Paul Caruso '20 qualified in Programmed Oral Interpretation and Drama. Rules state that debaters may only participate in one event. Therefore, he has chosen Drama. Jack Viscuso '21 qualified in Informative Speaking, while James Cullen '22 qualified in International Extemporaneous Speaking.

The month of March is underway and proving just as busy, as the team will compete in elimination tournaments for the National Catholic Forensic League Tournament held in Chicago over Memorial Day weekend. Stayed tuned for more updates from the Chaminade Speech and Debate team.

P.S. Save the date for our Speech and Debate Convocation dinner on Thursday, June 4, 2020.