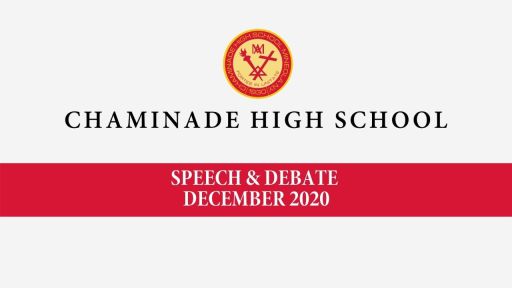 In March, when the COVID-19 (coronavirus) pandemic closed schools, most after school activities also stopped. The students on the Speech and Debate team were disappointed to see the New York State Championships and the National Catholic Forensic League Grand National Championship canceled. However, they were encouraged by the appearance of many online tournaments. Last year, Chaminade's speakers and debaters competed in the Tournament of Champions, the NSDA National Tournament, and the Ronald Reagan Great Communicators Qualification Tournament, all online. The students learned quickly how to navigate the online Speech and Debate format, competing from the safety of their own homes against students all around the country.

On Monday, June 8, 2020, Chaminade students competed in the National Speech and Debate Association's National Championship Tournament. Although they were disappointed that they could not travel to Albuquerque, New Mexico, they joined over 5,000 other students for a week of online competition. When it was over, Michael Bellia '21 broke to the elimination rounds and went to Round 10. Charles Weiler '20 and Peter Vouthas '20 were part of a Worlds Debate team with other students from the New York City area. They made it to the first elimination round. After being eliminated from Words Debate, Charlie and Peter went into Extemporaneous Debate, where Peter took 7th place in the country, earning an impressive 9-2 record.

Over the summer, the National Speech and Debate Association worked hard to offer a platform that schools could use while at home. Maintaining viable programs has always been a priority of the NSDA, even in the time of a pandemic. The NSDA was able to roll out its platform, NSDA Campus, which has allowed leagues to run tournaments, even when they could not run traditional in-person tournaments. Those who have competed in the past hope to return to conventional tournaments, but they understand that NSDA Campus has allowed programs to function while schools cannot host.

When Chaminade returned to school, the Speakers and Debaters were ready for a new but different year. The students had to learn how to navigate the online format. Performing a drama piece online is much different, as speakers had to find a neutral background for performances, test microphone volumes, and plan movement with an eye to the camera. Debaters had to learn to read opponents and judges from the small boxes on the screen. And these veterans had to teach these newly learned skills to the newest members of the team.

Speech and Debate on Long Island has always had a busy schedule. This has been no different this year. The League still holds tournaments every weekend, but they are now done via NSDA Campus. The team has also participated in its usual "away" tournaments, but they were also done online. The online format offered new opportunities, as they competed in Grapevine and Bellaire Texas, and at Duke University, tournaments they had never attended in person. While they cannot wait to travel again, the online platform has offered them new opportunities.

Debaters have also excelled. Kenneth Farry '21 debated late into the night at the Bellaire, TX tournament, finishing as an octofinalist in Varsity LD. Nathaniel Bernich '21 broke to eliminations at Duke in Varsity LD. Zachary Stoyer '23 was a semifinalist at Yale and a quarterfinalist at Grapevine in JV LD. Aidan Thomas '22 and Luke Strauss '22 were semi-finalists in JV Public Forum Debate at the William Tennent Tournament.

Bro. John McGrory '84, the club's moderator, is proud of how the students have learned to compete in this new environment. "Certainly, this is not how they expected to compete, but they have not only adjusted but even flourished. Thanks to the NSDA's Campus platform, we can offer the students the opportunity to compete in public speaking."

The team looks forward to returning to normal, but until then, they will keep the same dedication they have always had to this activity.