Graduation of the Class of 2018 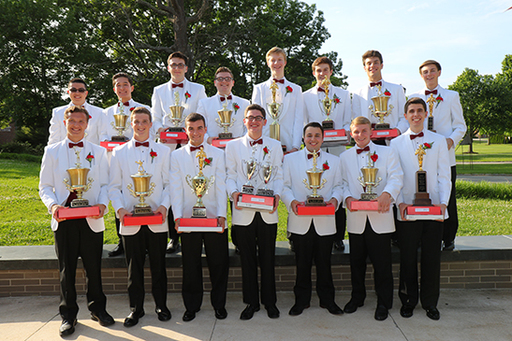 374 members of the Class of 2018 became Chaminade's newest alumni Sunday.

The day's events at the Tilles Center for the Performing Arts on the LIU Post campus began with the Baccalaureate Mass at 9 a.m. Families then reconvened at 4 p.m. for commencement exercises.

Shawn Connell and Nicholas Plante were respectively named valedictorian and salutatorian of the graduating class. Shawn and Nick earned the distinction by both a vote of their peers and their academic success during their four years at Chaminade. Shawn will pursue studies at Fordham University, while Nick prepares to begin at the University of Pennsylvania.

John Paul (JP) Lynch entered an honored group of graduates, earning the Chaminade Man of the Year Award for the Class of 2018. The Chaminade Man is the most cherished and anticipated award bestowed at commencement. Simply put, the Chaminade Man embodies all of the characteristics a student aims to be – a well-rounded, faithful, intellectual Catholic man. During his four years at Chaminade, JP volunteered as a catechist with the Parish Religious Education Program (PREP), assisted patients and staff at a local hospital, wrote for Tarmac, and cooked with the Culinary Club. JP also served on the Intramural Officials Club and was on the Flyers basketball and volleyball teams; he was named the most valuable player in the volleyball championship game helping Chaminade win over St. Francis Prep.