The world was watching Tuesday, Feb. 6 as the SpaceX Falcon Heavy, the world's most powerful rocket, launched from Cape Canaveral, Fla. Very few were paying attention just as closely as David Hegermiller '06. Dave is a lead test engineer at SpaceX's facility in Texas.

"My legs were shaking," he said. "I don't think I took a breath for a least half a minute."

SpaceX, founded by businessman Elon Musk, sent Falcon Heavy into orbit past Mars. It carries one of his one-ton Tesla Roadsters, but the rocket has the capability to bear up to 140,000 pound into Earth orbit or 37,000 pounds into a trans-Mars injection orbit. Dave was the test director for the rocket's center core structural qualification campaign, verifying that it could handle these loads and the complex, three booster load interplay.

"We tested, we checked everything, but we had yet to see this in flight," Dave recalled, as Falcon Heavy roared to life on the launch pad. Then, with 27 engines lighting and five million pounds of thrust, the rocket took off into the sky. Dave was then able to catch a breath.

"It's an inspiration to me and everyone who didn't witness the Space Race," Dave thought. "I'm glad people get to see it now. Innovation has returned to our collective thoughts about space." 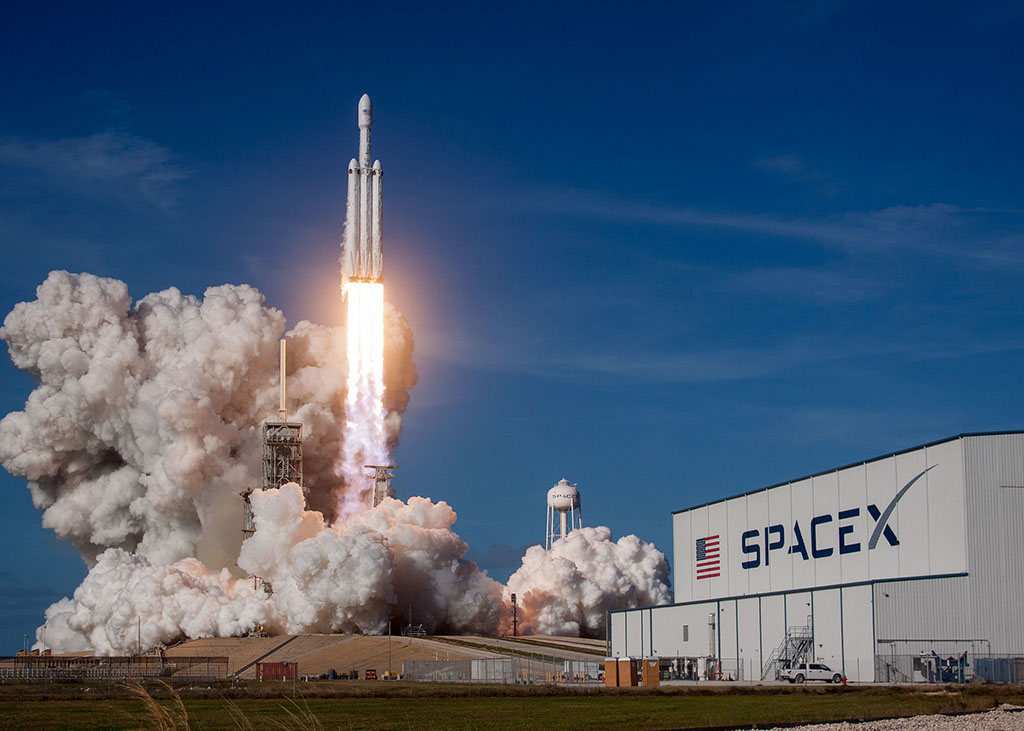 Dave began work with SpaceX in 2013, still considered a start-up at the time. He said the attitude of a developing company is still there – the team is willing to try new things and take calculated risks. But sending a rocket into space, not to mention the coinciding fanfare, was not on Dave's mind as a Chaminade student, riding the train in the morning or in the crew boat in the afternoon. He considered a career in the Navy, working on a submarine, or as a pilot.

"I always knew I wanted to be challenged to do something difficult." But, he admits, "Nothing this momentous came to mind."

And, it could be just the beginning for Dave and SpaceX. Falcon Heavy is less expensive and twice as powerful as the nearest competitor. NASA and commercial users can now plan new, heavier missions for Earth orbit and for journeys to the moon or farther away from Earth.

Dave now looks to his high school and the one giant leap it's making in the study of the applied sciences.

"The Science, Technology, and Research Center is wonderful, but what will happen there is the bigger draw," he said. "It's about having exciting challenges for students, getting outside the box. Math and science become more engaging when you can see their applications. Those opportunities, a whole batch of projects, and partnerships with local companies you wouldn't otherwise have will make Chaminade's science center something special."

There's not much time for Dave to relish in the moment of Falcon Heavy's success, though it will undoubtedly remain with him forever. The launch was the first of a jam-packed 2018 campaign planned by SpaceX. Company leaders have said SpaceX aims for around 30 missions this year from launch pads in Florida and California, and is contracted by NASA for manned crew missions to the International Space Station.

But, the most powerful force driving SpaceX is Mars. The company has announced plans to create a Big Falcon Rocket, or BFR, with more than double Falcon Heavy's thrust. This will be the most powerful rocket ever built, and with reusability at SpaceX's core, it will truly be a gamechanger for the space industry.