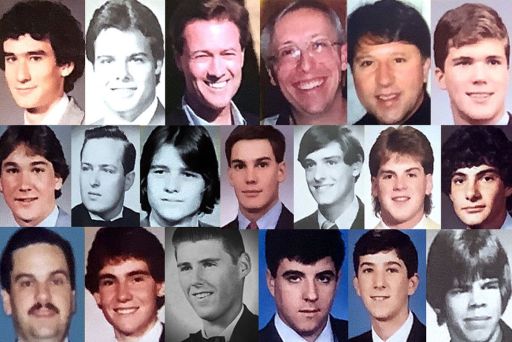 "Lord, for your faithful ones, life is changed, not ended!"

September 11, 2001, was not the first time that George G. Howard rushed into Manhattan to come to the aid of those in danger. In fact, it was his second. Similar to 1993, he was enjoying his day off at home in Hicksville, rather than spending the day at work at John F. Kennedy International Airport, and decided that others were more important than himself. The only difference was that this time in 2001, he would not return home.

George graduated from Chaminade in 1975. "When George was a sophomore at Chaminade, he wanted to play lacrosse because his older brother [Robert] was very good at it," George's brother, Timothy Howard '81, reflected. "So he got a bunch of friends together and went to the principal at the time, Bro. Gary Eck, to tell him he'd like to start a lacrosse club and that his older brother would be the coach. Bro. Gary agreed, and George went home to inform Bob that he had no choice but to be the coach. The rest is history." 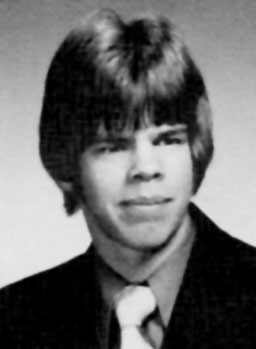 George went on to become a volunteer firefighter with the Hicksville Fire Department and attended St. John's University briefly before establishing several small companies. "He was never a show-off and never really bragged about anything, despite the fact that he was basically good at everything," George's sister Gerri-Anne Satterfield remembers that he truly was a jack-of-all-trades.

In 1977 he was accepted as a Washington, D.C., firefighter and lived in Maryland, all while traveling back and forth to New York almost every weekend.

It was in those first responder roles that he found his passion. His brother, Robert Howard, explains, "It's what he lived for. That was his vocation, truly. He found himself helping in some of Long Island's major emergencies and enjoyed helping others."

When he returned to New York in 1986, he became a Port Authority police officer, and, at the same time, his brother Patrick became a member of the Fire Department of New York. 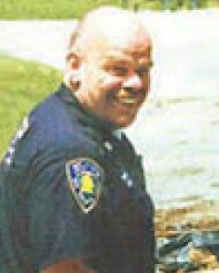 In 1993 when a truck bomb detonated underneath the North Tower of the World Trade Center, George was off-duty but felt it necessary to drive into Manhattan to assist with the recovery. He managed to save 62 kindergarten students via a small opening in an elevator shaft, sending children out one-by-one. He was credited with saving all of their lives.

Eight years later George was sitting in his house when the first plane hit the North Tower. "George made it from Hicksville to Manhattan in less than an hour. He went to JFK and got a crew together to begin the rescue efforts," Tim explained.

When the North Tower collapsed, George was standing beside it and was crushed.

On September 14, 2001, President George W. Bush came to Manhattan to visit ground zero. He was then taken to the Javits Center to meet with families of fallen first responders. Arlene Howard, George's mother, was there, but she did not simply greet him. She did something that would become an iconic image for all families of first responders: she handed him her son's badge. 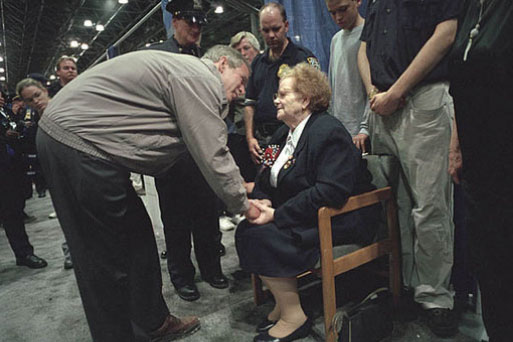 "She had to let him know that there was work to be done. He leaned over and explained to her that justice would be served. At that moment they became acquaintances and remained such for the rest of my mother's life," Gerri-Anne explained.

After her formative experience with the president, Arlene went on to become a safe haven for other families that experienced the trauma of 9/11, offering them a sense of hope and security.

"Once my mom realized that she could help people with her story, she started to get more into it and share her story with more people. Mom was able to help many people in the nation come to terms with their grief. She carried that attitude through with her until she passed away," Tim said. "She made it clear that there needed to be something done to stand up for the rights of the survivors and those affected."

While Arlene would frequent board meetings for different organizations and visit families of survivors, President Bush kept George's badge with him at all times for the remainder of his presidency. In fact, those who worked closely with the president remember seeing the badge on the table at every single meeting. He would sit down, remove the badge from his pocket, place it on the table, and put it back at the conclusion of the meeting.

"There are even photographs of the president at speaking engagements with my brother's badge on the podium. It's pretty remarkable," Gerri-Anne remembers talking with the president's colleagues. "That badge gave him a sense of purpose. It grounded him in his duty to serve justice and to honor those lost."

Today, George's badge is on display at the Bush Presidential Library in Dallas, Texas. 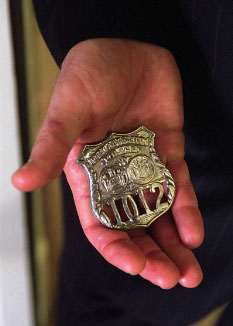 On May 7, 2009, in celebration of Police Memorial Week, the Chaminade Alumni Association made a solemn presentation with a replica of George's badge at a student body Mass in the Activity-Athletic Center. Members of George's family, including his mother, and many colleagues participated in the ceremony. The framed replica was placed on permanent display in the Darby Auditorium lobby. 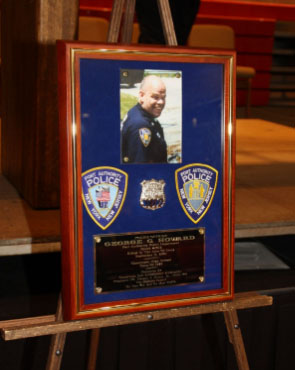 President Bush and his wife Laura spoke with Arlene just before she entered hospice care. "They tell me I don't have much longer," she jokingly told the 43rd commander-in-chief. After Arlene passed away in March of 2019, her body was given a dignified transfer to JFK and a police escort from the airport to Long Island. She also received an honor guard and pipes and drums at her funeral.

Chaminade President Bro. Thomas Cleary, S.M. '81, whose late father was a retired NYPD inspector, understands the importance of honoring those who have lost their lives to tragedy and the lessons it sends to the young men of Chaminade.

"To have a replica of George's badge at school is a constant reminder that there is work to be done, people to be served, and a legacy to honor. George's devotion to others mimics perfectly the Chaminade motto, 'The Chaminade Man does the right thing at the right time because it is the right thing to do, regardless of who is watching.'"

The Marianist Community and Chaminade High School honor all who perished on September 11, 2001, including the following members of the Chaminade Family. May they rest in peace!

Special thanks to the Howard family for their contributions to this article.